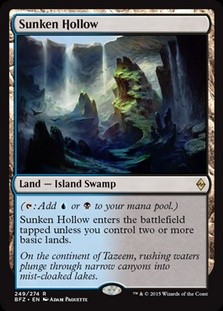 PucaTrade is a trading platform for Magic: the Gathering cards and a project I've been apart of since 2013. I am one of the Senior Developers on the project and a Co-founder of the company.

Puca has recently reached an amazing milestone! 6 million cards have been traded through the site!

Since we began, as any website, it lacked users and a community. What started as a very small network has expanded to over 150,000 users. The first million trades were the hardest, it took nearly 3 years to reach that goal and now the difference between the 5 millionth and 6 millionth trade was only 3 months. This is a huge goal for us and an important step to reaching 10 million!

If you know anything about the game you may want to know what was the 6 millionth card. Sunken Hollow from the Battle for Zendikar expansion set.